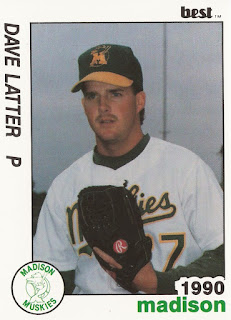 Pitching in his second season for USC, the announcer of this 1988 game noted Dave Latter's first year experience was vital for him.

"He has shown dramatic improvement from last year to this season," the announcer says in the clip posted to YouTube. "Fastball, curve, slider, change-up. He has very good breaking pitches."

Latter went on in that game to use those pitches to take a no-hitter into the sixth inning against the University of California-Santa Barbara.

He went on to use those pitches as a pro in six seasons. He made it as high as AAA, but he never made the majors.

Latter's career began in 1989, taken by the Athletics in the 33rd round of the draft out of the University of Southern California.

Latter started with the Athletics at short-season Southern Oregon. He got into 28 games, starting one. He had a 2.29 ERA.

That July in 1991, Latter served as best man for his old USC teammate and then Huntsville teammate Jim Campanis' wedding. Latter then went out and got tagged with the loss, according to The Los Angeles Times.

"It all worked great," Campanis told The Times afterwrard, "except for Dave."

The 1992 season was the one in which Latter made AAA Tacoma. He got five outings there, giving up four earned in 10.2 innings. He played the rest of that season at Huntsville and then returned for six final outings at Huntsville in 1993.

His affiliated career ended with a torn UCL. After surgery and 17 months of rehab, Latter returned for one final season. He played 1995 with independent Lubbock. He started 20 games, went 9-7 and had a 4.58 ERA.

Latter went on to have a cabinet business, be a stay-at-home dad and have a power wash business. Along the way, he became father of two children, ages 18 and 12 in 2014. In October 2014, he passed away at the age of 48 from complications of a heart infection.

"Baseball," his obituary reads, "was Dave's passion, his dream and until his children were born, his life."