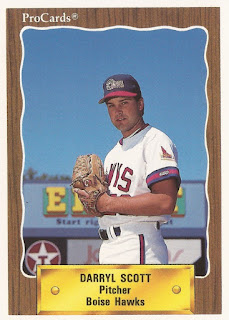 Albuquerque Isotopes pitching coach Darryl Scott has a baseball family. Not only did Scott play professionally and make the majors, but all three of his sons played in 2015 - two in college and one in the minors, according to The Albuquerque Journal.

"We do get a lot of sports," Scott told The Journal that July. "Actually, I’m really lucky to have three boys who grew up loving baseball and were able to spend a lot of time with me in the summers."

Scott's family baseball connections go beyond his own career and sons. His grandfather played in college. His great-grandfather also played.

In 1990 - just before Scott's own pro career began - Scott's baseball family tree, his family tree itself, expanded by one. He met the older brother he never knew, a man named Rich Gaynor. That brother, given up at birth by his teen mother, also went on to play pro baseball, spending eight seasons in the minors.

Years later, Scott recounted to The Wilkes-Barre Times Leader his and his family's sudden expansion with their reunion inside a Sacramento airport terminal.

"It was unbelievably emotional," Scott told The Times Leader. "When Rich started coming off that plane, tears were already rolling."

Scott's own pro path began that June in 1990, signed by the Angels as a free agent out of Loyola Marymount University.

Scott started with the Angels at short-season Boise. He pitched in 27 games, all in relief, posting a 1.34 ERA. He won two games and saved six.

Scott debuted with the Angels by pitching a solid inning against the Blue Jays.

"I probably had more jitters down in the bullpen," Scott told reporters afterward of shaking off his nerves for his debut. "Once I got in the game I got loose."

Scott got into 16 total games for the Angels that year and ended with a 5.85 ERA. Scott then went to Japan.

In 1998, he joined the Phillies system, the same system his long-lost brother once played in. He played at AA Reading, then AAA Scranton. He finished up his career in 2000, playing between the Phillies, Rockies and Diamondbacks systems.

He ended with the Phillies at Reading, getting his team out of a late-inning jam and on to a playoff victory, all in his 11th pro season, The Reading Eagle wrote.

"It's the love of the situation I came into tonight," Scott told The Eagle afterward of his longevity. "There's no better situation than that. It's an adrenaline rush that I'm not going to get anywhere else. There's no better feeling."