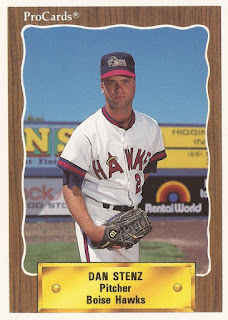 Scottsdale Community College left-hander Dan Stenz explained his approach to pitching to The Arizona Republic after a May 1987 game.

Stenz spoke after giving up two earned in a Scottsdale win.

"As long as I'm hitting my spots and keeping the ball down and countering with my change, I'm effective," Stenz told The Republic. "I'm better starting. (The game) is brand new and in my hands."

Stenz went on from Scottsdale to play at Grand Canyon University and in the pros. His pro career, though, was brief. He pitched in 18 pro games, all in relief.

Stenz college in Arizona after graduating from Whitefish Bay High School in Wisconsin.

He then played at Scottsdale and Grand Canyon. He helped Grand Canyon to the 1988 NAIA final, but took the loss in the title game. He picked up 15 wins and 133 strikeouts in 1989, still second and third all-time at the school.

The Giants drafted Stenz in the 21st round of the 1989 draft, but he didn't sign. He instead turned pro in 1990, signing with the Angels as a free agent.

Assigned to short-season Boise, Stenz got into those 18 games, totaling 18 innings of work. He gave up 15 earned runs for a 7.50 ERA, marking the extent of his pro career.