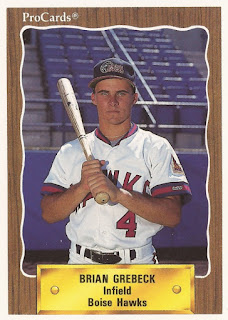 Brian Grebeck started the 1993 season as a backup. He also started as no power hitter, having hit exactly one home run in his first three pro seasons.

On three nights late that April, though, Grebeck did his best to prove his credentials in both, hitting three home runs on consecutive nights for the AA Midland Angels, The Los Angeles Times wrote.

"The wind's blowing out, and I hit a few fly balls," Grebeck told The Times after his feat. "I started out 0 for 12 this year. I felt I was sort of messed up from spring training. I figured it out and now I feel good."

Grebeck played that full year at Midland and he made AAA Vancouver he next year. He went on to play more than a decade in the pros, but he never hit well enough to make the majors.

Grebeck's career began in 1990, taken by the Angels in the 19th round of the draft out of San Diego State University. His brother is former major leaguer Craig Grebeck.

Grebeck started with the Angels at short-season Boise. He knocked a late go-ahead single in an August game and a two-run double in another. He hit .282 in 58 games overall.

His final regular affiliated time came in 1997 with the Astros at AAA New Orleans. For 1998, Grebeck signed with his first independent team, the Mission Viejo Vigilantes.

Grebeck then played at Zion in the Western League in 1999 and 2000 and St. George and Long Beach, ending his career.