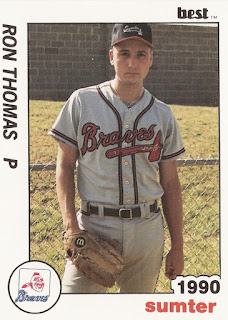 Ron Thomas went seven innings and gave up three runs in this May 1990 game for Sumter, according to The Sumter Item.

"Thomas did a good job," Yost told The Item afterward. "He kept us in the game until the seventh inning and then Earl and Donnie came in and did their jobs."

Thomas' career began in 1988, signed by the Braves as an amateur free agent out of his native Oneonta, NY.

Thomas started at rookie Pulaski. He got into 11 games, starting three and ended with a 4.74 ERA.

He played 1989 between the rookie Gulf Coast League and single-A Sumter, but he only got into a total of eight games on the year. He started six of them.

Thomas went another five innings in an early May game, giving up another single run. This time, though, he got the win. Helping him do that was a crucial bases-loaded pitch that resulted in a double play, according to The Item.

"The big thing was Ron threw a strike in that situation," Yost told The Item. "He ran the count to 3-1 and had been struggling, but he bore down and did what he had to do. If he doesn't throw a strike there it's a different story."

Thomas ended his run that year with a 4-4 record. He didn't get into a fourth season.