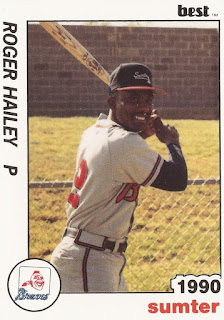 With the way Roger Hailey was pitching for single-A Sumter in 1990, those five runs Sumter scored in the first inning should have ended the game right there, according to The Sumter Item.

Instead, they played out the rest of the game, Hailey going eight innings, striking out 10 and giving up just two earned runs.

"Anytime you give Roger a five-run lead, you're doing alright," Sumter manager Ned Yost told The Item. "He's pitching well for us."

By the time he was done at Sumter, Hailey had a sterling 10-1 record, with a 2.02 ERA. It was good enough to make the all-time Sumter Braves team, as picked from six Sumter seasons by The Item later in the year.

But his time at Sumter couldn't get him to higher pursuits. Moved up to high-A Durham later in 1990, Hailey could get no higher. He played at Durham through 1992, including a shortened 1991 season. He never made it to AA, much less the majors.

Hailey's professional career began in 1988, signed by the Braves as an undrafted free agent. It was a rotator cuff injury scaring off teams in the draft, The Newport News Daily Press wrote later.

As a youth, Hailey had flashed brilliance as far back as Little League. In 1982, Hailey threw a perfect game, The Anson Record and The Messenger and Intelligencer wrote. That came after four outings where he pitched two no-hitters and two one-hitters.

Hailey continued that into American Legion ball. In 1986, Hailey struck out 18 batters in one game. The next summer, Hailey picked up a complete game win, striking out nine, The Wilmington Morning Star wrote.

In August 1987, in the American Legion Southeastern Regional Tournament, Hailey turned in a five-hitter, striking out 11, The Orlando Sentinel wrote.

Those outings came after the 1987 draft, one where, scouts and colleges were looking at Hailey, The Daily Press wrote. Then came his rotator cuff injury. The Braves ultimately signed Hailey as an undrafted free agent that September, Hailey bypassing offers to play college ball in North Carolina.

"I figured it was my best chance to go pro," Hailey told The Daily Press in 1990. "It was a once-in-a-lifetime chance."

Hailey, though, reagravated his injury in 1988, getting only one start with rookie Pulaski. Coming back to Pulaski for 1989, though, saw Hailey go 7-3, with an ERA of just 1.41.

He continued his 1989 work at Pulaski with that 1990 season at single-A Sumter. Hailey got his sixth win against no losses in late May, going eight innings, giving up two runs.

But Hailey couldn't translate that success at other levels. In 11 starts at high-A Durham that year, he went just 3-5, with an ERA of 5.11.

But, after his 1990 season at Sumter, Hailey's manager Yost recalled seeing Hailey early on, after he signed with the Braves.

"The first time I saw him," Yost told The Item of seeing Hailey before his early injury, "you could tell he had real good stuff."