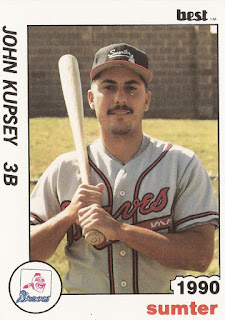 It was a performance that Eustace had seen all too often - and one Eustace coach Joe Galliera told The Philadelphia Inquirer he hoped he'd see again in the pros.

"It's been a pleasure watching John Kupsey for four years," Galliera told The Inquirer. "To watch him play has been phenomenal. He is all the good players I remember seeing wrapped in one. I wish him all the luck in the world. He's a nice kid and I hope he makes it."

Kupsey played in that game shortly after he was taken by the Braves in the second round of the draft. out of Gloucester Catholic in southern New Jersey.

Kupsey moved to single-A Sumter in 1990. He hit .216 in 68 games. He doubled and scored in an August game, but it was his final season with the Braves.

After a season away from the game, Kupsey returned for 1992 with the Phillies at single-A Spartanburg. He hit .246, with four home runs that year. He hit one of his home runs in a June game.

Kupsey has since returned to southern New Jersey. He's listed in 2014 as a coach with the South Jersey Titans youth baseball team.