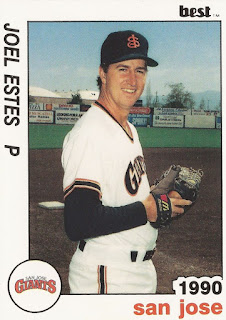 It was the opening game for the Arizona Wildcats in the 1986 College World Series and the Wildcats were down 7-0.

The Wildcats ended up coming all the way back for the win. The reliever on the mound when they pulled ahead was Joe Estes, pitching a 1-2-3 inning to hold back the opposing Maine Black Bears, according to the Wildcats media guide.

Estes went on to pick up two wins in relief in that College World Series as the Arizona Wildcats went on to win the title.

Estes then went on to a pro career, one that lasted five seasons, but also one where Estes never saw the majors.

Estes, also known as Joel Estes, started his pro career that year in 1986 when the Astros selected him in the 26th round of the draft out of Arizona.

With the Astros, Estes played 1986 at short-season Auburn and single-A Asheville. Between them, he got 29 outings, posting a 1.82 ERA.

For 1987, Estes moved to single-A Osceola, getting 47 outings, two starts. He also posted a 2.51 ERA. He picked up one of those wins in a July game against Lakeland.

Estes spent 1988 between Asheville and Osceola, getting 42 outings with a 2.67 ERA. He then got his first look at AA with Columbus in 1989. His stay at Columbus, though, lasted 17 outings, Estes moving mid-season to the Giants.

With the Giants, Estes played out the year at single-A Clinton, moving to high-A San Jose for 1990. Estes also got nine games at AA Shreveport, giving up nine earned runs in 14 innings. It was his final year as a pro.

Estes went on to leave baseball and enter the financial industry. In 1997, he was listed as a stock broker with Merrill Lynch.