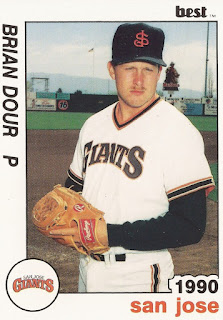 So, after the local school board unexpectedly decided to take the baseball program and his other coaching job in the basketball program in different directions, Dour looked back on his time with pride, he told The Springfield State Journal-Register.

"I'm very proud of what we accomplished in a short amount of time," Dour, also an elementary teacher, told The State Journal-Register. "The first couple of years were a learning experience for the kids and for me. We were able to build the program to a high standard."

Dour coached the Triopia baseball team having played the game previously himself, both in college and the pros. His professional career, though, was a brief one, playing just four seasons and never making the majors.

Dour's professional career began in 1989, taken by the Giants in the fifth round out of Bradley University in Illinois.

With the Giants, Dour played his first season between short-season Everett and single-A Clinton. Between them, he went 3-6 in 14 outings, 12 starts. He also posted a 2.86 ERA.