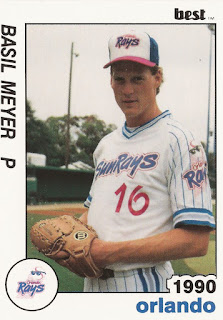 Orlando's starter Johnny Ard barely made it into the third inning. He gave up five runs on seven hits, The Orlando Sentinel wrote.

Coming in to stop the bleeding, though, was Basil Meyer. Over the next three innings of work, the reliever Meyer was perfect, The Sentinel wrote. It was also a game Orlando came back to win 7-6 in extras.

''That was a game with 900 turning points,'' Twins Vice President Bob Gebhard, in town for the contest, told The Sentinel afterward.

While Meyer came on and helped turn that game into an Orlando win, he never was able to turn his career toward the majors. His career consisted of four seasons as a pro, that year at AA Orlando being his last.

Meyer's career began in 1987, signed by the Twins as a free agent out of the University of Minnesota-Morris.

With the Twins, Meyer started at rookie Elizabethton, getting into 14 games in relief. He went 1-2, with a 5.04 ERA.

Meyer moved to single-A Visalia for 1989, picking up 12 saves in 58 outings. His first two saves came on consecutive nights in early April, the second one picked up off of a double play.

It was in 1990 that Meyer arrived in Orlando. Over that year, which would be his last, Meyer got into 55 games, with a 4.33 ERA. In early-April, Meyer teamed up with Ard on a better day for Ard, the two throwing a three-hitter. Meyer's two innings in that game were hitless.

Meyer's career over, Meyer went on to briefly serve as a coach for the Minnesota-Morris football and baseball teams. More recently, Meyer has worked outside of sports, as a software engineer.