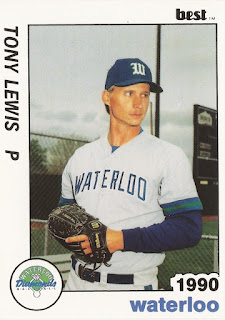 Tony Lewis chose to return to Pepperdine for another year rather than signing as a pro. He then got hit in the face with a line drive, according to The Los Angeles Times.

In his second game of the 1987 season, Lewis suffered multiple broken bones, forcing him to undergo surgery and miss most of the spring season. By late April, Lewis was back on the mound, The Times wrote.

"He made no bones about it," Pepperdine coach Dave Gorrie told The Times. "From the beginning he said he was going to come back--and he will."

Lewis made it back to the mound - and he was drafted again. His career, though, didn't last as long as he had hoped. He played just three seasons. He never made AA.

It was the Padres who selected Lewis in that June's draft, taking him in the 18th round. It was a five-round improvement over his 1986 draft position.

Lewis started with short-season Spokane, getting 15 outings, 12 starts. He went 5-3, with a 5.14 ERA. That July, Lewis overcame a slow start to get a win.

"Usually, the first inning is kind of tough for me," Lewis told The Spokane Chronicle after that game. "I've got to get used to the mound and just get settled in."

Lewis threw a two-hit shutout in an August game. He picked off a runner in another contest that month.