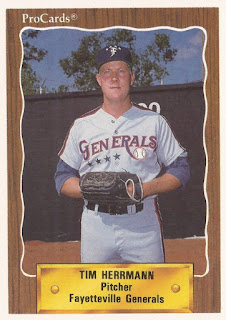 Tim Herrmann picked up his sixth victory for Texas A&M in this May 1989 game. He also picked up something else, according to The Kerrville Times. He picked up his first college hit.

Both the win and his first hit appeared to be helped along by the score. Texas A&M took the victory by a score of 25-4.

Herrmann went on from Texas A&M to play as a pro. His pro career ended up being brief, just two seasons. He never made AA.

Herrmann's career began that year in 1989, taken by the Tigers in the 25th round of the draft out of Texas A&M. He previously attended Blinn College.

At Blinn, Herrmann took a loss in a March 1986 game, striking out seven, but walking seven.

Herrmann started with the Tigers at short-season Niagara Falls. He went 7-4 in 15 starts, with a 4.21 ERA.