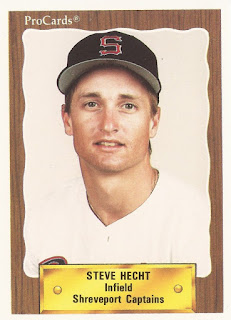 Steve Hecht got it done with both his bat and his arm in this May 1993 game for AA Shreveport, according to The Tulsa World.

Hecht hit a double and triple in the Shreveport win. He also cut down a runner at third with a good throw, squelching a possible Tulsa rally, The World wrote.

"I love to play defense," Hecht told The World afterward. "It's the key to success."

Hecht went on to realize another key to success, sports psychology. Hecht played a total of eight seasons as a pro, making AAA but not the majors. He's since gone on to career as a sports psychologist - and made the majors doing it.

Hecht's career in baseball began in 1987, taken by the Giants in the fifth round of the draft out of Oral Roberts University. He signed and first hit the field in 1988.

He started between single-A Fresno and short-season Everett. He moved to single-A San Jose in 1989, hitting .265. He made AA Shreveport to start 1990, then moved to the Expos system and AAA Indianapolis mid-year.

He got into 58 games at Indianapolis in 1990, then returned there for 1991. He didn't see Montreal. After playing 1992 at AA Harrisburg, Hecht returned to the Giants system for 1993. He split that year between Shreveport and AAA Phoenix.

Hecht continued playing for three more years, moving to the Rangers and Tigers AAA clubs in 1995, then rounding out his career in Mexico in 1996.

Hecht soon started his second career, in sports psychology. In 2009, Hecht served with the Mariners as a performance coach, assisting players in mental training, according to The Seattle Post-Intelligencier.

In December 2015, Hecht worked as a sports psychologist for the Rangers. He spoke to The Abilene Reporter-News about his role.

"I see so many coaches who only work on technique when they're trying to help an athlete," Hecht told The Reporter-News. "That's because they don't know how to develop the mental side. There are some athletes who look great who you wouldn't want in a big game if you knew what was going on inside their brain."
1990 Minor League Tally
Players/Coaches Featured: 2,313
Made the Majors: 957-41.4%
Never Made Majors:1,356-58.6%-X
5+ Seasons in the Majors: 399
10+ Seasons in the Minors:242
Posted by Steve78 at 9:39 PM