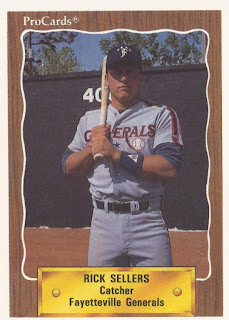 That's because good players can come from anywhere, he told The Evening News.

"That's the awesome thing about baseball," Sellers told The Evening News. "Players can and do come from every type of background. We don't discount anything geographically. Kevin Tapani came from Escanaba (and Kingsford, MI) and had a long pro career."

Sellers turned scout after a playing career where he had his own long career, recorded as playing over nine seasons. He made it to AAA, but he never made the majors.

Sellers' career began in 1989, signed by the Tigers as a free agent out of Central Michigan University.

Sellers started with the Tigers at short-season Niagara Falls. He hit .254 over 29 games. He moved to single-A Fayetteville for 1990 and had success early. He hit two home runs in an April game.

"I knew coming out of spring training I could hit in this league," Sellers told The Fayetteville Observer after that April performance. "I just needed to get in there and get in a rhythm."

Sellers ended up hitting .230 on the year. He then moved to high-A Lakeland and improved his average to .275. He went 3 for 4 in a June game.

Sellers moved to AA London for 1992, then briefly hit AAA Toledo for 1993. He played 1994 and 1995 with the Reds between AAA Indianapolis and AA Chattanooga.

Sellers is recorded as playing in two more seasons, both in independent ball and both years apart. He played 73 games at independent Elmira in 1997, hitting .317. He then played 2001 at Somerset, hitting .246 over 68 games, ending his career.