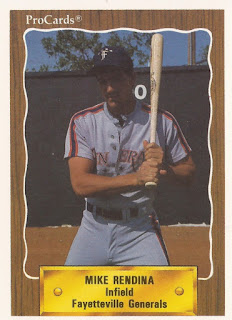 The Bowie BaySox tried to adjust, but Mike Rendina adjusted with them, according to The Baltimore Sun.

Rendina, playing for AA London in July 1993, adjusted to go 3 for 4 and knock in five runs, The Sun wrote.

"The first two times, [the pitcher] threw me fastballs, and then he started throwing curve balls," Rendina told The Sun afterward of a single that scored two. "I just waited for something off speed in that at-bat, and it just looped in there."

Rendina had played for London that year in his sixth season as a pro. He went on to play in six more, including time in independent ball. In his 12 seasons of waiting, though, he never made it higher than AA.

Rendina's career began in 1988, taken by the Tigers in the 13th round of the draft out of Grossmont High School in California.

Rendina started with the Tigers at rookie Bristol. He hit .200 over 39 games. He then played 1989 between Bristol and single-A Fayetteville. He hit .116 in 28 games at Fayetteville, then .272 the rest of the way at Bristol.

He played 1996 between independent Reno and AA Harrisburg with the Expos. Rendina then played his final three seasons in the independent Western League, between Grays Harbor and Sonoma County.