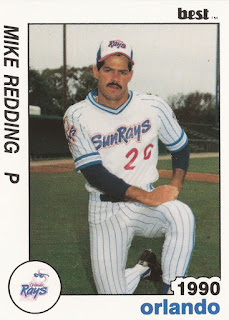 Mike Redding hadn't been a regular starter in two years, but, on this August 1990 night, Redding was every bit one.

That's because he went six innings against rival Memphis without giving up a hit, only pulled to start the seventh because his manager thought he'd had enough, according to The Orlando Sentinel.

"I suppose I had enough,'' Redding told The Sentinel afterward, agreeing with his manager. ''I'm pleased things went the way they did. Those guys (Memphis) helped me a lot. When I got behind in the count, they would hit my pitch."

Redding gave that performance in his sixth season as a pro. It was also his last. Redding made AAA Portland for a game that final season, but he never made it to the majors.

Redding's career began in 1985, taken by the Twins in the third round of the January draft, out of Manatee Community College in Florida.

With the Twins, Redding started at rookie Elizabethton, getting nine outings, seven starts. He moved to single-A Kenosha for 1986, going 6-10, with a 4.08 ERA over 20 starts.

Redding played 1987 at single-A Visalia, then split 1988 between Visalia and Kenosha. At Kenosha in 1988, Redding went 6-7 over 15 starts. He also threw a full no-hitter, according to The Sentinel.

Redding moved up to AA Orlando for 1989. There, as a reliever, Redding posted a 3.86 ERA, picking up two saves. He went three innings in relief in a May game, stopping an eighth-inning rally with a strikeout, according to The Sentinel. He also stopped another potential rally in June.

Redding returned to Orlando for 1990, getting into 34 games, five starts. He posted a 2.81 ERA and earned a brief promotion to Portland. In one outing at Portland, a start, Redding gave up three earned runs while not making it out of the third. It was his final season as a pro.