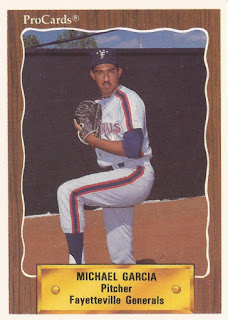 Mike Garcia knew how to handle not being in the majors. He handled it for a decade before even making it to the bigs.

So, when the Pirates sent him down to start the 2000 season, took it in stride, according to The Pittsburgh Post-Gazette.

"I've been in this game 11 years," Garcia told The Post-Gazette after making his return to the bigs. "You grow. You mature into a certain type of person. All you can do is the best you can do. The ball's either going to bounce your way or it's not."

For Garcia, the ball eventually bounced his way. He started his pro career in 1989, then finally made the majors in September 1999. He got there after stints in Mexico and in Taiwan.

Garcia's patience got him a total of 20 major league outings over two seasons, along with a 1-2 big league record.

Garcia's career began in in 1989, taken by the Tigers in the 55th round of the draft out of Riverside Community College in California.

Garcia started with the Tigers between rookie Bristol and short-season Niagara Falls. He went 5-4 between them, with a 2.41 ERA. He moved to single-A Fayetteville for 1990. He also earned the Opening Day start.

"I'm looking forward to pitching opening day," Garcia told The Fayetteville Observer that April. "It's when everybody is all excited. They've been waiting five or six months for baseball. It's a very special day."

Garcia went 12-8 for Fayetteville, with a 2.55 ERA. He made high-A Lakeland in 1991, then AA London in 1992. He returned to London to start 1993, but his first stint in affiliated ball soon ended. He played out that season at independent Rochester.

He then played the next six seasons outside the United States. He played three in Mexico, then three in Taiwan.

Garcia returned stateside in 1999, playing the season at AAA with the Pirates. That September, he got his call to the majors.

Garcia got into seven games for the Pirates that year, giving up one earned run in seven innings of work.

He then looked to return for 2000. Early that March, Garcia threw two solid innings in a game, giving up one hit.

"I'm trying to just like I did last September - throw strikes," Garcia told The Post-Gazette after that outing. "If I think about the situation with the bullpen this spring, I'll get off my game. I just want to throw strikes and let the chips fall where they fall."