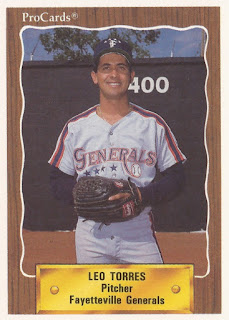 Leo Torres picked up the save in this June 1990 game for Fayetteville - a long save.

Torres pitched over the final four innings of the 8-2 win over Greensboro to seal the Fayetteville victory, according to The Greensboro News & Record.

Torres saved a total of three games for Fayetteville that year, his second season as a pro. He went on to play in two more seasons. He made AA, but he didn't make the majors.

Torres' career began in 1989, signed by the Tigers as a free agent out of his native Dominican Republic. He's sometimes credited by his full name, Leonardo Torres.

Torres started with the Tigers at single-A Fayetteville in 1989. He went 9-10 there, with a 3.94 ERA over 43 outings, 10 starts. He threw a scoreless inning in a July Fayetteville win. He gave up four earned in an inning and a third in another July outing.