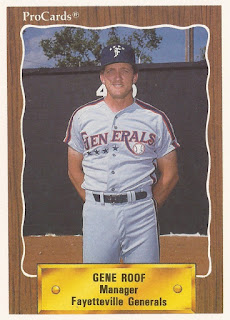 Gene Roof took over the Toledo Mud Hens mid-season in 1997, according to The Toledo Blade.

The veteran Roof just took it in stride, The Blade wrote.

"I've been around and this is nothing new," Roof told The Blade that June. "Every day in the game is a good day for me. Besides, baseball is so unpredictable. This is just a part of the game."

By that point, Roof had many good days in the game. He'd been in the game for more than 20 years as both a player and as a coach.

He also had days that were likely particularly good as both, making the majors for parts of three seasons as a player, and more as a coach.

Roof's long career in baseball began in 1976, taken by the Cardinals in the 12th round of the draft out of St. Mary's High School in Peducah, Ky.

Roof started at rookie Johnson City, hitting single-A Gastonia in 1977 and then St. Petersburg in 1978. Roof hit .258 in 101 games for St. Petersburg, coming back from a foot injury suffered on a hit by pitch, according to The St. Petersburg Evening Independent.

"Being a major league prospect like he is, you don't rush him back," St. Petersburg manager Hal Lanier told The Evening Independent.

Roof proved that prospect status by making the majors in September 1981. Roof expressed his excitement to UPI after his first big league start.

"I was pumped up," Roof told UPI, "but I really wasn't that nervous. After the first inning, I was OK."

Roof got into 23 games for the Cardinals down the stretch, hitting .300 and stealing five bases. He returned for 11 games in 1982 and 14 more split between St. Louis and Montreal in 1983, marking the extent of his major league career.

Roof finished out his playing days in the minors. He then made his way into coaching. He served as hitting coach at AAA Toledo in 1987, then got his first managerial job at single-A Fayetteville in 1989.

He moved up to AA London in 1991, managing there. He then moved all the way up to Detroit for 1992, serving as first base coach. He recounted his return to the majors to The Fayetteville Observer later. He learned of his promotion during off-season instructional league.

"They (Detroit officials) told me I was being promoted to a big league coach," Roof told The Observer. "I was ecstatic about it because I wasn't expecting it to happen that soon.''