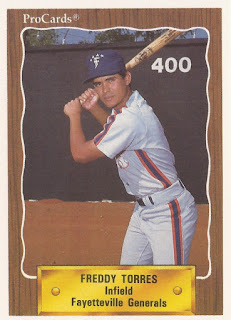 Brewers scout Freddy Torres had a message for his scouting coordinator about young Venezuelan hitter Orlando Arcia, according to MLB.com.

"I got this guy here that can really swing the bat," Torres said, according to the site.

Torres' Brewers eventually signed Arcia, who soon became a Milwaukee top prospect, making AA Biloxi in 2015. Torres was once a minor leaguer himself. He played two seasons. He never made AA.

Torres' career began in 1989, signed by the Tigers out of his native Venezuela.

Torres started with the Tigers at single-A Fayetteville and short-season Niagara Falls. The infielder got into 88 games between them, hitting .221.

He returned to Fayetteville for 1990. He picked up three hits in a July game, knocking in four. Overall, he hit .206 in 106 games. His second season marked his last season.