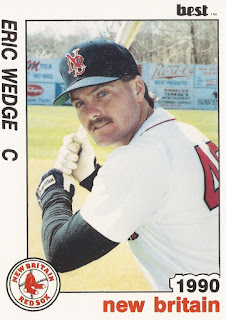 Fresh out of the third round of the 1989 draft, Eric Wedge got the opportunity to hit in front of Red Sox brass, playing in the annual Hall of Fame game that July.

"There wasn't any pressure," Wedge told The Patriot Ledger News Service of the seventh-inning home run. "I had a chance to show what I can do; maybe some people liked it. I hope they did."

Some people must have, or at least what they saw in his first three professional seasons. By the end of 1991, Wedge made his major league debut, a single game and a single at bat to finish out the season with the Red Sox. He also got a hit in that one at bat.

Wedge would go on to brief stints in four major league seasons. But Wedge would be known for a baseball career that's extended beyond his playing days. He's better known now as a major league manager, managing the Indians and, for 2011 through 2013, the Mariners.

Wedge was selected by the Red Sox in the third round of the 1989 draft, out of Wichita State. Wedge had just helped the school to the 1989 College World Series championship.

Along the way, he hit another crucial home run in a game against Florida State, waiting through an hour-long rain delay to do it. With the bases loaded and the score tied, Wedge was due up. But the rain came. When it stopped, Wedge headed to the plate and hit a grand slam, according to The Los Angeles Times.

"I didn't go in there (the dugout) and have a brainstorm too much," Wedge told The Times afterward. "I just wanted to hit the first good pitch."

In all, Wedge hit .380, with 99 RBIs and 23 home runs for Wichita State that year, according to The Associated Press.

In the pro ranks, Wedge started at short-season Elmira, hitting .234 with seven home runs in 41 games. The catcher also got a 14-game look at AA New Britain.

Coming back for 1992, Wedge spent the season at Pawtucket, before getting called up in mid-August. It would prove to be his longest stint in the majors, 27 games.

In late August, the catcher was even used as a pinch runner, in place of the ailing Wade Boggs. "Eric runs real good for a catcher," Red Sox manager Butch Hobson told The Boston Globe.

Wedge hit .250 for the Red Sox in 1992, along with five home runs. That off-season, Boston left him unprotected in the expansion draft and he became a Rockie.

Going into spring training 1993, Wedge was looked at as the Rockies' backup catcher, The AP wrote. Except he had a sore elbow. He was coming off surgery.

"I can do everything but hit and throw," Wedge joked to The AP that February.

He returned to play in just nine games for the Rockies that year, going 2 for 11. The Rockies released him during spring 1994. He signed back on with the Red Sox by May, getting two final major league appearances in July.

Wedge spent the rest of 1994 and all of 1995 at Pawtucket. He held on as a player through 1997, playing in the Tigers and Phillies organizations. In April 1997, playing for AAA Scranton, Wedge got the game-winning hit in Pawtucket.

It was his final year as a player. By 1998, Wedge was managing in the Indians system, at single-A Columbus. By 2003, he was back in the majors, as a manager.

In hiring Wedge, Indians GM Mark Shapiro recalled to reporters getting Wedge to manage in the Indians system back for 1998, beating out the Phillies for Wedge's services. Shapiro knew Wedge had major league potential, according to MLB.com.

"I eked out a tight race with the Philadelphia Phillies," Shapiro told reporters. "Eric Wedge became a Cleveland Indians manager in our farm system."