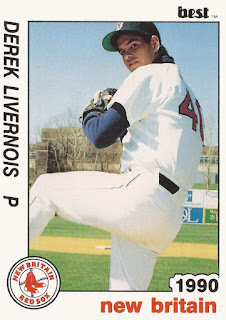 Derek Livernois' mother Sue put into words to The Orlando Sentinel what her son was feeling after signing with the Red Sox in 1985.

"It's every young baseball player's dream to play professional baseball,'' Sue Livernois told The Sentinel. ''This is what he wants to do. I'm glad to see him get paid for something he loves so much."

At Lyman, in April 1985, Livernois' coach Bob McCullough encourage Livernois to develop his breaking ball, over his fastball, The Sentinel wrote. Livernois, though, still looked to his fastball.

"It's a matter of confidence," Livernois told The Sentinel. "I like to throw that cut fastball. It works for me."

Livernois played two more seasons. He split 1992 between New Britain and Pawtucket. Going into 1993, he was seen as a long shot to make Boston. He never made it, playing the year back at Pawtucket, ending his career.