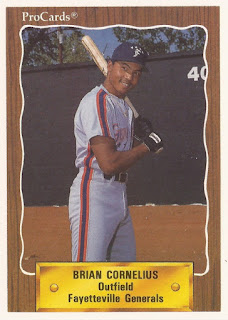 Brian Cornelius went on a hot streak in June and July 1990 - a Fayetteville record 21-game hitting streak to be precise, The Fayetteville Observer wrote.

"Obviously I can't take credit for the hitting streak," Roof told The Observer. "But what we've tried to work with him on in batting practice is to work on his stroke in batting practice. We want him to just hit and spray it around the field; to hit correctly. We've worked on getting his proper mechanics down."

Cornelius used the mechanics he learned to go on to a career that spanned 13 seasons. He spent six of those seasons in affiliated ball, the rest on the independent circuit. He never made the majors.

Cornelius' career began in 1989, taken by the Tigers in the 43rd round of the draft out of Southern University and A&M College in Louisiana. Born in Guyana, he grew up in Brooklyn and Miami.

Cornelius played his first year with the Tigers at short-season Niagara Falls. He hit .319 over 68 games. He then split 1990 between Fayetteville and high-A Lakeland. He hit .305 in 94 games at Fayetteville, then .238 in 34 at Lakeland. He knocked in three runs on a bases-clearing triple in an April 1990 game.

Cornelius made AA London for 1992 and returned there for 1993. He played the second half of 1993 at AA Jacksonville.

He started his independent run in 1994 at San Antonio. He hit .309 there. He then got 12 games with the Pirates at high-A Lynchburg in 1995, ending his affiliated career. He played that rest of that year and the next at independent Moose Jaw.