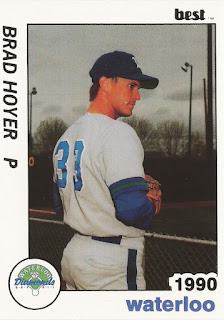 Brad Hoyer made is professional debut in 1988 and he did well enough to impress his pitching coach, according to The Spokane Chronicle.

Hoyer picked up the final five outs in that June game, pitching out of some rough spots to record the save in the Spokane win, The Chronicle wrote.

"He showed a lot of poise," Spokane pitching coach Jack Lamabe told The Chronicle of Hoyer after the game. "When it got a little hairy, he threw strikes."

Hoyer finished out that season with 23 outings, all in relief. He ended up seeing time in three more seasons. He never saw AA.

Hoyer's career began that year in 1988, taken by the Padres in the 24th round of the draft out of Cal Poly.

Hoyer started with the Padres at short-season Spokane. In those 23 outings, he posted an ERA of 2.36. He also picked up four wins and five saves.

That July, Hoyer spoke to The Spokane Spokesman-Review about his early season success, a success that came after a brief college playing career as a walk-on.

"I've been pretty happy with my success," Hoyer told The Spokesman-Review. "I've been waiting for the day when I get hit hard ... I need to have that happen so I don't get the feeling I'm invincible."

Hoyer started seeing that adversity in his second season, at single-A Waterloo. In 33 outings, 13 starts, his ERA came in at 5.48. He also picked up one win to six losses.

He stayed at Waterloo for 1990 and returned to full-time relief work. In 51 outings, he picked up seven wins, six saves and a 2.28 ERA.

That winter, Hoyer was traded to the Red Sox with another player for Wes Gardner. He played the 1991 season at high-A Lynchburg. He got into 52 games there, with a 3.62 ERA. It was his final year as a pro.