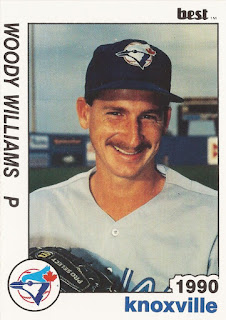 He was also 41 years old and pulled from the Astros' starting rotation, according to MLB.com.

"It's sad that the season's come to this, and it's sad that we're doing as poorly as we are, but it's a good time to look at some young kids and see what they can do and give them some experience," Williams told MLB.com. "I always remember my first time up in the big leagues. Being a September callup for them is special, and it's a good time to put some excitement out there."

It was almost a wonder that Williams remembered that first big-league call up. It happened 15 seasons earlier.

From that big league debut to his time with the Astros in 2007, Williams amassed a total of 132 major league wins, including one season with 18, the season he made his All-Star appearance. He also posted a career ERA of 4.19 and struck out nearly 1,500 batters.

Williams' pro career began back in 1988, taken by the Blue Jays in the 28th round of the draft, out of the University of Houston.

With the Blue Jays, Williams started at short-season St. Catharines, getting a look at AA Knoxville that first season. In 1990, Williams played at Knoxville full-time, getting three appearances at AAA Syracuse.

It was in 1996 that Williams turned starter. He pitched just 12 games for Toronto that year, but started 10 of them. He hardly relieved for the rest of his career.

In one August 1996 start, Williams went seven innings, giving up just one earned run, after his previous start where he gave up five in just two innings, The Associated Press wrote.

Williams stayed with the Blue Jays through 1998, going 10-9 his final season there. For 1999, he was traded to the Padres, picking up double-digit wins in each of his first two seasons there.

In July, Williams made his only All-Star appearance. But it didn't go as he had hoped.  The National League lost 7-6. Two of the American League's runs were given up by Williams.

"I just knew I had to pitch one inning," Williams told MLB.com afterward. "Hopefully, I would go out there and not give up any runs, but it didn't work out."

Williams stayed with the Cardinals through 2004, getting his only outing in the World Series that October. Williams started Game 1 for St. Louis, but couldn't get out of the third, giving up seven earned.

Williams returned to the Padres for two seasons, then signed with his hometown Astros for 2007. After getting pulled from the rotation in favor of younger pitchers that September, Williams returned for spring 2008, but didn't pitch in the regular season again.

Williams has since spent three seasons as head coach for Fort Bend Christian Academy in Sugar Land, taking his team to the state semi-finals in two of those seasons, according to The Examiner.