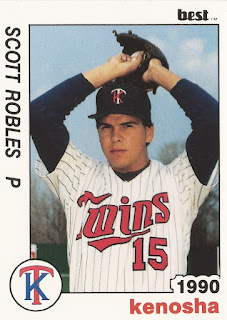 Scott Robles used his pitching skills from Mount San Antonio College to catch the eye of scouts for the Twins.

Robles soon found himself signing with Minnesota and turning pro. His pro career, though, was brief. It lasted just two seasons.

Robles' career began that year in 1989. He wasn't taken in the draft, but he did sign as a free agent with Minnesota by late June.

Robles went to Mount San Antonio out of Baldwin Park High School in California. With Baldwin Park in 1986, Robles and his team made it to the California Southern Section finals.