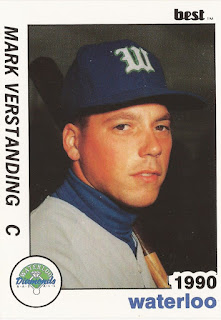 The Padres high-A affiliate had just moved to a new home in the California League in 1991 and Mark Verstandig was there as part of the inaugural roster.

Playing for the new High Desert Mavericks as a backup catcher, Verstandig told The Los Angeles Times his hopes.

"I'm just waiting for an opportunity to go somewhere as a starter," Verstandig told The Times, "and play every day."

Verstandig's career began in 1987, signed with the Padres as an undrafted free agent out of St. Lawrence University in New York State. He went to St. Lawrence out of the Albany Academy in Albany, NY.

In the Albany area, Verstandig played summer collegiate ball for the Schenectady Mohawks in 1986 and was named an all-star. At St. Lawrence, Verstandig was twice team MVP. according to The Schenectady Gazette. His work with the Mohawks won him induction into the local Hall of Fame.

With the Padres, Verstandig played his first season between short-season Bend and Spokane. In 45 games, Verstandig hit .296, with 19 RBI.

For 1988, Verstandig returned to Spokane. He told his hometown Bethlehem Spotlight he had hoped for a full-season slot. But the undrafted catcher was trying to make the best of his time at Spokane.

"I've got the ability to move up, but whether or not I get the breaks is another story," Verstandig told The Spotlight. "I just take it one day at a time."

Verstandig spoke to the paper in mid-August, just before getting called up to AA Wichita. He got four games there, getting two hits in eight at bats.