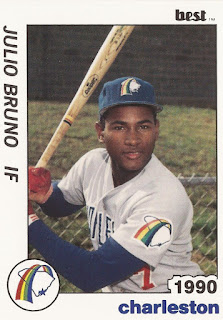 Spokane manager Gene Glynn was impressed with his young infielder Julio Bruno in 1990, according to The Spokane Spokesman-Review.

"You can tell he loves baseball," Glynn told The Spokesman-Review. "With his great work habits, he's brought a lot of respect from the other players."

Bruno took those work habits to a long career as a player, spending more than a decade as a pro. Those work habits, though, weren't enough to get him to the majors.

Bruno has since taken his love for baseball and returned to the game as a coach. For 2014, he's serving as a coach in the Royals system at rookie Idaho Falls.

Bruno's career began that year in 1990, signed by the Padres as a free agent out of his native Dominican Republic.

He played his first season between short-season Spokane and single-A Charleston. He hit .245, with 27 RBI. He knocked in a run on a single in an August game.

In 1994, he made AAA Las Vegas. That spring, the third baseman Bruno had a good diving catch down the line. "I just kind of reacted," Bruno explained to The Associated Press later.

That April, Bruno doubled and scored the extra-inning winning run in a game. Overall, Bruno hit .260 at AAA that year, with six home runs and 52 RBI.

After playing the next two seasons between AA Memphis and Las Vegas without seeing San Diego, Bruno got into one more year in affiliated ball in the Tigers organization. He played his final three years in Mexico, last playing in 2000.

By 2008, Bruno was back in the game, serving as manager of the Royals entry in the Arizona League. In 2012, he was hitting coach at single-A Kane County.

Bruno not only coaches, but he helps his Latin players assimilate into the culture, according to The Kane County Chronicle.

"Not only in the baseball area, but also as a person," Bruno told The Chronicle, "I feel like I can teach about my past, my life and I think that will help."

For 2014, Bruno is serving as bench coach for the Chukars at Idaho Falls.