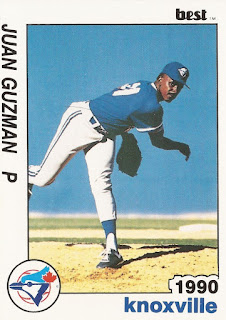 Coming off a Game 3 performance where he went six and gave up two runs for the win, Juan Guzman came back four days later and did it even better.

He went seven innings, gave up a single run and pitched the Blue Jays into the 1992 World Series.

"You can say whatever you want," Blue Jays pitching coach Galen Cisco told The Associated Press after the game, "but Juan told the story. He came ready to pitch."

Guzman came ready then, like he'd been all year. In his second season in the majors, Guzman had become a cornerstone of the Blue Jays' World Championship pitching staff, going 16-5 on the season, with a 2.64 ERA.

But it was success he could rarely duplicate later in his career. Pitching in 10 major league seasons, Guzman's career ended in 2000 with a career record of 91-79.

Guzman's career began in 1985, signed by the Dodgers out of his native Dominican Republic. He stayed in the Dodgers system for three seasons, only making it to single-A.

Then, for 1988, Guzman was traded to the Blue Jays, the Dodgers virtually forcing him on Toronto, Dodgers officials recalled to The Los Angeles Times after Guzman's rookie campaign in October 1991. The Blue Jays wanted Jose Offerman in a trade, they instead got Guzman.

That July, Juzman went eight innings and gave up three hits in a game with Knoxville. His manager, John Stearns was at a loss to explain the outing. Guzman's ERA was 5.25 to that point, The Orlando Sentinel wrote.

"I can't explain why he pitched so well," Stearns told The Sentinel. "Juan has an outstanding arm, but he's struggled with control in the past. But if he throws strikes, he'll be effective."

"You've got to make adjustments, keep working to get better," Guzman told The AP after his fifth victory. "That's what I'm doing right now."

Guzman kept it going for 1992 with that 16-5 campaign, pitching the division-clinching game, then late the ALCS-clinching contest. In the World Series, Guzman got one start, going eight innings and giving up just one earned run.

"I didn't do anything different in the American League," Guzman told The AP after three good starts with the Reds. "The difference is, I'm getting some runs."

Signing with the Devil Rays for 2000, Guzman came out of spring training with a sore shoulder. He got into just one game, April 7. It was his final major league outing. He played into 2001, in the minors, but could not make it back to the bigs.