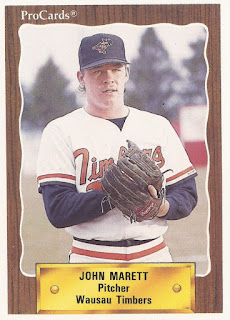 The Orioles signed 11 more of their 1988 draft picks on this day that June and among those picks was John Marett, according to The Washington Post.

Marett and the rest of the new Orioles signees reported to minicamp and then eventually on to their assigned teams.

Marett went on to play that year at rookie Bluefield, then in two more pro seasons. Marett never made AA.

Marett's career began that year in 1988, taken by the Orioles in the 45th round of the draft out of Charles D. Owen High School in Black Mountain, N.C.

Marett played that first year at Bluefield. The hurler got into 16 games, starting one. He had a 2.89 ERA and went 0-2.