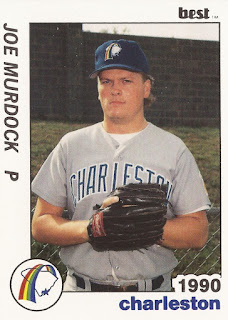 Murdock pitched that game in his second season as a pro. He got into just one more.

Murdock's career began in 1988, taken by the Padres in the 18th round of the draft out of Southern Arkansas University.

Murdock played his first year between the rookie Arizona League and short-season Spokane. He got 10 starts in Arizona and one in Spokane. Between the two, he had a 4-4 record and a 5.80 ERA.

For 1990, Murdock returned to Charleston. But it was a brief return. In five relief outings, Murdock had a 6.10 ERA and picked up one loss. Those five outings were his final outings as a pro.