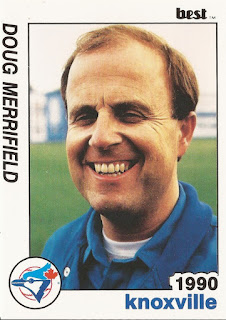 The Kitsap Sun recounted Doug Merrifield's long career as a in athletics in February 2016.

That career included time as a trainer at AAA, two World Series rings from his time in the Blue Jays organization and trainer of the year honors from the Tennessee Athletic Trainers Society for 2015.

"He is living proof," The Sun wrote, "that you don't have to be the best athlete, or even an average athlete, to have a great career in athletics."

Merrifield's long career began in Kitsap, Wash.. He grew up in the area, graduated from Western Washington State College and then got his masters in physical education degree from the University of Washington.

Merrifield made the Kitsap Hall of Fame in 2003. His listing notes he worked in professional baseball in five systems. Merrifield's first look at pro training came in 1971 with the Cubs. He has been a certified trainer since 1980.

He worked in the Blue Jays system for several years, including the 1992 and 1993 championship seasons. Merrifield served with the Blue Jays at high-A Hagerstown in 1997, his third year with that club.

He got his final baseball card that year in 1997. "We didn't want to leave anybody out," Hagerstown fan club president Gary DeWeerd told The Washington Post that summer, "that's why we got one for Doug."