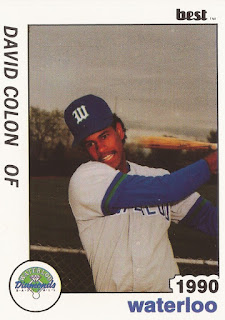 The coach was right, The Sumter Item wrote. Colon would have been out, had opposing Spartanburg not threw the ball away. Instead, Colon raced home with the game-winning run.

"Sometimes you have to be lucky in this game and we've had our share of breaks go against us this year," Sumter third base coach Ned Yost told The Item. "The important thing is that we fought back against a very good ball club tonight."

Colon was also in his second of just two seasons in the Braves organization. Three more with the Padres and Angels organizations and Colon's career ended, never hitting AA, much less the majors.

Colon's career began in 1987, signed by the Braves out of his native Puerto Rico. Colon played that season in the Gulf Coast League, hitting .256 in 55 games.

Colon moved to single-A Sumter in 1988. In 74 games, Colon hit that .195. In May, though, Colon had three hits in a game. In late August, Colon got one single on a bad hop, knocking in the game-winning run. A few days earlier, Colon doubled and scored in a 7-6 win.

Colon played out his final two seasons with the Angels at high-A Palm Springs. He hit .256 his first year there and .229 his second. That second year with the Angels turned out to be his last as a pro.