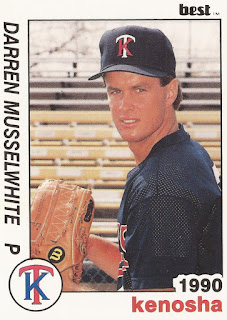 Local insurance agent Darren Musselwhite took on a new title in his hometown of Southaven, Miss., in 2013, that of mayor.

At a local Chamber of Commerce luncheon that August, he said why, according to The DeSoto Times-Tribune.

Musselwhite moved on to the challenges of insurance and the Southaven mayor's office after first facing challenges in another field, the baseball field.

Musselwhite's baseball career began in 1989, taken by the Giants in the 40th round of the draft out of the University of Mississippi.

With the Giants, Musselwhite played 1989 at rookie Pocatello. He went 4-5 over 28 outings, six starts. He had a good relief outing in one August game, and a win in another.

Musselwhite soon made his way back home to Southaven, becoming an insurance agent licensed in both Tennessee and Mississippi. In 2013, he got elected Southaven mayor, a post he continues to hold in 2016.