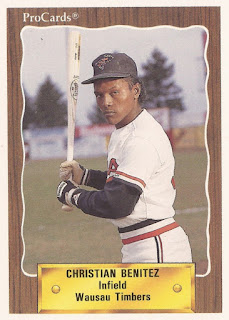 The 1990 season wound down and with it the Wausau Timbers' time in Wausau.

"All of a sudden," Young said to The Journal, "it seems like the season has gone by awful fast."

Timbers second baseman Christian Benitez may have had the same sentiment, not so much for the Timbers' season, but for his own career. As the 1990 season wound down, Benitez' short career did, as well.

Benitez' career began in 1989, signed by the Orioles as an undrafted free agent out of his native Dominican Republic.