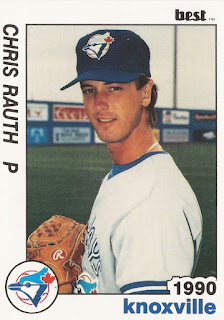 The Port St. Lucie Mets pulled out the win in this May 1988 game and St. Lucie manager Clint Hurdle pointed to his starter Chris Rauth's performance as the big reason, according to The Palm Beach Post.

Rauth gave up five hits en route to the 4-1 victory, The Post wrote.

"The key tonight was that Rauth kept away from that big inning," Hurdle told The Post afterward. "He was constantly ahead of the batters and he pitched aggressively."

Rauth worked on hitters over seven professional seasons. He made AAA, but he never made the majors.

Rauth's career began in 1985, taken by the Mets in the 15th round of the draft out of Ithaca College.

At Ithaca, Rauth helped take his team to the 1985 Division III World Series with 12 wins. He threw eight shutout innings in a regional contest.

Rauth moved to the Blue Jays and AA Knoxville for part of 1990. He played the rest of that year with independent Reno. He posted a 6.24 ERA overall.

Rauth's final time in pro ball came after two seasons away, in 1995 at independent Adirondack. He threw eight innings in a July loss, giving up five runs but one earned. He went 9-6 on the year, ending his career.