Charles Thompson, Too Much - 21 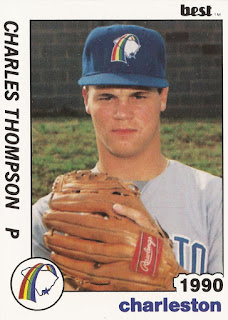 The ball came right back at Charleston pitcher Charles Thompson in this May 1990 contest. But he couldn't field it.

The third-inning come-backer hit Thompson in the leg and bounded away for a single, according to The Sumter Item.

Thompson gave up two runs that inning. He kept it together to go eight full innings. But the total five five runs, four earned, that he gave up were too much for his team to overcome. Charleston lost 5 to 2.

Thompson was in his second season as a pro that year at Charleston. He got into just one more. He never made AA.

Thompson's career began in 1989, taken by the Padres in the 33rd round of the draft out of South Johnston High School in North Carolina.

At South Johnston, Thompson also played football. He threw a touchdown pass in a September 1988 game.