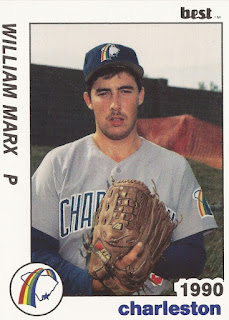 Bill Marx went eight innings in this August 1985 game for short-season Spokane, giving up three hits. Asked by The Spokane Chronicle afterward what he had working that night, Marx had a ready answer.

"Everything, really," Marx told The Chronicle. "I felt I had pretty good command of all my pitches. I felt really good out there. I had a lot of confidence."

Marx had that confidence in his first season as a pro. He went on to get into four more. He never made AA.

Marx' career began in 1985, taken by the Padres in the 14th round of the draft out of Bradley University in Illinois.

Marx played an abbreviated 1987 with the Padres at single-A Reno in the California League. He got just nine starts and had a 5.71 ERA.

Marx stayed in the California League for 1988, playing at Riverside. He went 5-6 that year and 4-12 back at Riverside in 1989. In May 1989, Marx finished out a no-hitter for teammate Darren Reichle.