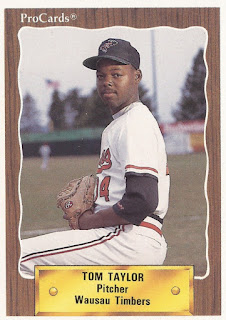 During Tommy Taylor's first week in the summer amateur league, he was ready to come back home, his coach recalled later, during Taylor's senior year in high school.

Then his attitude changed, Louisa High coach Bill Pelot told The Fredericksburg Free Lance-Star in March 1989. He threw a no-hitter and he met some new friends.

"I think it is going to help him down the road," Pelot told The Free-Lance Star.

Pelot spoke while his pitcher was in the midst of a 7-1 season at his high school, posting an ERA of 1.15.

It was enough to get scouts interested, and for the Orioles to bite, selecting him in the second round, 33rd overall in that June's draft. But, while it was enough to make him Baltimore's second selection, behind Ben McDonald, it wasn't enough to get him to the majors.

Taylor started his professional career slowly with the Orioles' rookie league team in Bluefield. In 10 starts, he went 1-3 and posted an ERA of 6.48.

His professional woes continued down the road of his career, never posting an ERA close to the promise he showed in high school.

Taylor returned to AA at Bowie for 1993. Going into that season, The Free Lance-Star was still saying Taylor appeared to have a solid future. His hometown paper noted the Orioles had signed Taylor to a AAA contract and that the Orioles were looking at him as a closer.

Taylor ended up with four saves that year for Bowie, never seeing AAA. That May, Taylor went seven relief appearances without giving up a run, marking 10.1 innings.

But he also made four starts, one coming in a late June win against Canton, keeping Canton in third and Bowie in second place.

"It was kind of a big one," Taylor told The Baltimore Sun afterward. "They were right behind us and we wanted to stay in second. We didn't need to be passed."

Taylor finished out the season in the Indians system, playing at high-A Kinston. Taylor played five games at AA Canton in 1995, then 14 more with the Brewers at AA El Paso in 1996, ending his affiliated career.