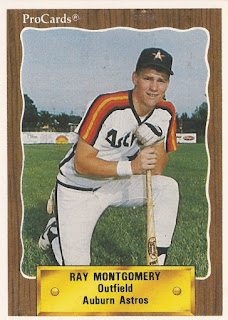 Going into his seventh professional season, Ray Montgomery hoped the muscle he added that off-season would help him get to the ultimate goal, according to The Tucson Citizen.

His manager at AAA Tucson Tim Tolman believed it was possible for Montgomery, according to The Citizen.

"The key for him is staying healthy," Tolman told The Citizen that April. "You can tell he did a lot of hard work in the off-season to get himself ready to go and it has really paid off for him."

It really paid off for Montgomery later that year with his first call up to the majors. He got into 12 games for the Astros that year. He ended up seeing time in two more major league seasons. Later, he turned to helping find others who could get to the bigs, continuing in baseball as a scout.

Montgomery's career began in 1990, taken by the Astros in the 13th round of the draft out of Fordham University.

Montgomery started with the Astros at short-season Auburn. He hit .233 there over 61 games. He then moved to single-A Burlington for 1991 and AA Jackson in 1992.

He made AAA Tucson briefly in 1993, then full-time in 1994. He largely stayed at Tucson into 1996. Then, in July 1996, Montgomery made the majors with Houston. He stayed up most of that month and then returned in September.

That July 24, Montgomery hit what turned out to be his only major league home run. The two-run shot proved the game-winner.

"Unfortunately, I still remember everything about it," Montgomery told The Newport News Daily Press years later. "It's part of the frustration. I had a chance. I had a three-week stretch where I played every day."

His final major league time came in 1996. He picked up two hits in five at bats over six games, ending his major league career. He continued to play in the minors through 2001, ending with the Mets at AAA Norfolk.

In November 2014, Montgomery returned to the Brewers as vice president of amateur scouting and special assistant to the general manager.

"Ray brings experience, critical leadership and the courage and confidence to make tough decisions," Brewers GM Doug Melvin told MLB.com after the hire. "I have confidence that with his recent experience as a director, he will sustain the organization's success of drafting and development in a highly competitive scouting environment."
1990 Minor League Tally
Players/Coaches Featured: 2,221
Made the Majors: 940-42.3%-X
Never Made Majors:1,281-57.7%
5+ Seasons in the Majors: 394
10+ Seasons in the Minors:237
Posted by Steve78 at 1:00 PM