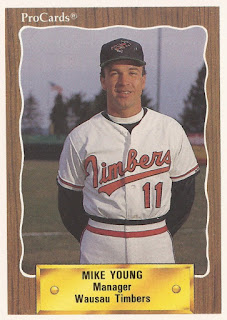 "What am I going to do?" Young said afterward, according to The Journal. "These kids have to learn."

Young learned himself by doing - and traveling. A native of Chicago who played his college ball in Wisconsin, Young went on to play in the Netherlands and coach in Australia and in the minors. In Australia, he coached the national team to the 1988 Olympics.

Young's varied career began in after his 1978 graduation from the University of Wisconsin at River Falls.

He turned pro briefly, playing in 1979 and 1980 in Holland. He also went to Australia in 1981 to play and later manage. He also met his wife there.

In Australia, Young played or managed for Brisbane, helping the club to five national championships. In December 1985, the coach Young saw himself ejected from a contest for arguing in a loss.

"I'm disappointed, but they outplayed us," Young told The Sydney Morning Herald afterward.

In 1985, he served the summer as a coach with the Blue Jays at rookie Medicine Hat, returning to Australia in the off-season. He coached the Australian national team for three years, including in the Seoul Olympics. The team placed sixth.

Young returned stateside for 1989, serving as manager at rookie Bluefield with the Orioles. He moved to manage single-A Wausau in 1990, then coached at AAA Rochester in 1991 and 1992.