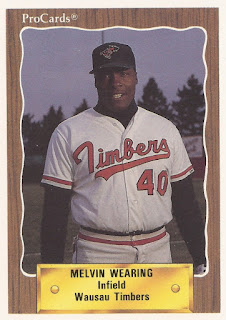 Mel Wearing started off playing football in college. That's what his college scholarship said, according to The Newport News Daily Press.

He soon switched to baseball, a move he told The Daily Press that came from the heart.

"Baseball is my love," Wearing told The Daily Press in May 1991. "A lot of people thought it was football, but no. I really love baseball and I wanted to be comfortable, so I made the switch."

Wearing made the switch and then went on to a professional career that spanned more than a dozen seasons. He made AAA in that time, but he never made the majors.

Wearing's career began in 1989, taken by the Orioles in the 25th round of the draft out of Norfolk State University.

At Norfolk State, Wearing won conference MVP honors three times, and Division II All-American twice. He hit .431 over his career, along with 35 home runs and 167 RBI. All three remain school records, according to the school.

Wearing started with the Orioles at short-season Erie. He hit .251 over 60 games. He moved to single-A Wausau and high-A Frederick for 1990, then briefly made AA Hagerstown in 1991 and AAA Rochester in 1992.

Wearing arrived at Rochester in July 1992 and he got off to a hot start, according to The Baltimore Sun. He hit his first career grand slam that month, something he told The Sun he wanted to continue.

"A big power hitter like myself getting just regular base hits to right field, they don't pay attention to that," Wearing told The Sun. "I don't feel like I did anything yet. I want to open some eyes. Shock people."

Wearing returned to Rochester full-time in 1993 and to start 1994, but he never made Baltimore.

Wearing soon moved to independent ball, leaving the affiliated minors behind. He spent time at independent Thunder Bay in 1994, as well as in Mexico. He played 1996 between Moose Jaw and Regina.

In 1998, he arrived at independent Bridgeport, where he stayed for the remainder of his career. In September 1998, Wearing helped his club to a playoff win with both his bat and his glove.