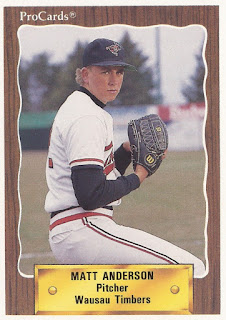 Matt Anderson signed with the Orioles and the new high school graduate was ready to go.

He was ready to go to Bluefield, Virginia, home of the rookie league Bluefield Orioles. He was looking to move right into the Bluefield starting rotation, The Los Angeles Times wrote.

Anderson's career started that year in 1989, taken by the Orioles in the fifth round of the draft, out of Buena High School in California. The left-hander chose the Orioles over Cal State Northridge.

At Bluefield that first year, though, Anderson got off to a slow start. He started only five games, getting into nine others. He picked up four losses to no wins, and an ERA of 8.66.

For 1991, Anderson moved with Wausau to Kane County, going 13-8. The Chicago Tribune noted Anderson's strikeout to walk ratio in June, 70-26. He had 166 strikeouts by the end of the year.

Anderson spent 1992 at high-A Frederick. He went 7-7 in 18 starts, with a 4.36 ERA. He got most of those appearances by early July. Then, teammate Gregg Zaun praised the pitcher to The Times, saying he was "capable of being the best pitcher in the league."

"Matt's been making some mechanical adjustments this season," Zaun told The Times. "It doesn't always click right away when you try some new things, but he's battled."

Arm problems limited his 1993 season to just three games, in the rookie Gulf Coast League. He returned in 1994, at single-A Albany, moving mid-year back to Frederick.