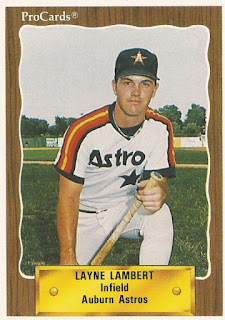 Layne Lambert provided all the offense his Osceola Astros needed in this July 1992 game, according to The Lakeland Ledger.

Osceola beat Winter Haven by a score of 1 to 0. Lambert drove in that run on a double, The Ledger wrote.

Lambert knocked in that run in his third season as a pro and in a season where he briefly made AA. He didn't return for a fourth. Lambert never made the majors.

Lambert's career began in 1990, taken by the Astros in the 15th round of the draft out of UNLV.