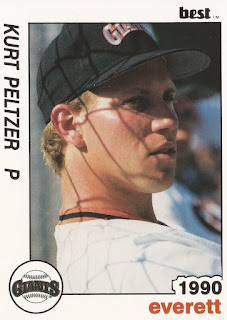 Kurt Peltzer gave the fans - and himself - something to talk about that July game in 1995.

That something for the independent Western League's Long Beach Barracudas was the league's first-ever no-hitter.

Peltzer, though, didn't just have the opportunity to talk about it as the pitcher who threw the gem, he got to talk about it as he served a second role with the team, as the club's media and public relations director, according to The Los Angeles Times.

Peltzer's professional career began in 1990, taken by the Giants in the 11th round of the draft, out of the University of Wisconsin at Oshkosh.

He went to Oshkosh after graduating from Wisconsin's New Berlin West High School. In 2009, Peltzer was honored as part of the inaugural class of the school's hall of fame.

With Oshkosh, Peltzer saw his team go all the way to the 1988 Division III World Series championship. Peltzer, a freshman, started the game, pitching into the seventh and giving up four runs. Oshkosh, though, would go on to lose the game and title.

As a pro, Peltzer started at short-season Everett, going 3-1 in 18 outings, five starts. He picked up one of those wins in August, with a six-inning relief performance.

Peltzer moved to single-A Clinton and AA Shreveport for 1991, pitching completely in relief, posting a 4.66 ERA between them.

He played 1992 mostly at high-A San Jose, then 1993 between San Jose, Shreveport and AAA Phoenix. His time at Phoenix consisted of 13 outings, giving up 12 earned runs in 16 innings of work.

Peltzer then played 1994, his final year with the Giants organization, back at Shreveport, getting 39 outings and posting a 2.94 ERA.

In his affiliated career, Peltzer had gotten only those five starts at Everett. Moving to independent Long Beach for 1995, though, he got 21 starts. He also turned in a 3.75 ERA and a 13-5 record, with that no-hitter. It was his final year as a pro.