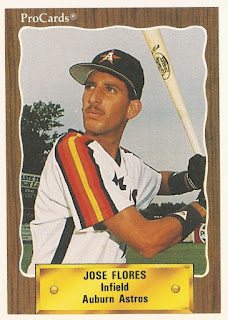 Jose Flores' late single in this May 1993 game didn't mean much in the outcome of the game. It knocked in Osceola's third run in a 10-3 loss.

The single, though, did do something else. It extended Flores' hitting streak to 18 games, according to The Orlando Sentinel, tying Flores for the franchise best mark.

Flores went on that streak in his fourth season as a pro. He came back for a fifth season in 1994, making AA, but he never made it higher.

Flores' career began in 1990, taken by the Astros in the 38th round of the draft out of his native Puerto Rico.