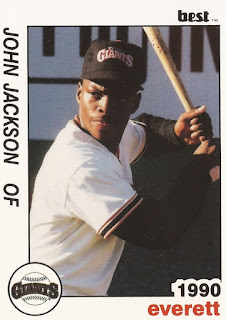 In his sixth season as a professional baseball player, The Hartford Courant asked John Jackson the all-important question.

The question: What if he never made the majors?

"Then you gambled and lost," Jackson told The Courant. "It was a gut feeling I had at the time. I'm having fun. That has a lot to do with it. I play for fun, not for the money or the fame. . . . You have to want to play the game."

The "gut feeling" Jackson had was to choose baseball over football. For his first three years as a pro, Jackson played both, baseball in the minors and football in the National Football League with the Phoenix Cardinals. Since, though, he had played baseball exclusively.

Jackson's gamble never did pay off. He never made the major leagues.

Jackson's pro careers began in 1990, taken by the San Francisco Giants in the sixth round of the baseball draft out of USC. He was also signed that year by the Phoenix Cardinals, having played wide receiver in college.

With the football Trojans, Jackson won All-Pac 10 honors in 1989 and best offensive player honors for that year's Notre Dame game, according to the USC media guide. In 1988, he caught the game-winning pass in the Stanford game, sealing a 24-20 USC win.

With the Trojan baseball team, Jackson won second team Academic All-American honors in 1990. He was also All-Pac 10 in both 1989 and 1990, according to the baseball media guide.

With the Giants, Jackson started at short-season Everett. In 23 games, he hit .304. In June, he told The Seattle Times he was ready to play.

"I'm not here to be in the lap of luxury," Jackson told The Times. "I'm here to learn how to play major-league baseball."

By the end of July, though, Jackson was ready to learn how to play NFL football in Phoenix. With the move came an offer from the Giants to let him play baseball on his off days, with the Giants' AAA team, which happened to be in Phoenix, according to The Los Angeles Times. Jackson, though, declined. With the Cardinals, Jackson got into nine games, recording one fumble recovery.

For 1991, Jackson moved to single-A San Jose, but played just 14 games there. He played more games, 16, that fall with the Cardinals. He served as a kick returner and caught eight passes.

In 1992, Jackson moved to the Angels and up to AA Midland, getting into 40 games, hitting .291. With the Cardinals, Jackson got into six games, recording his only pro touchdown reception. It was his last year with the Cardinals.

Focusing on baseball in 1993, Jackson got his first full season of work. He also hit .309 between Midland and AAA Vancouver. Over the next two seasons, Jackson hit .293 and .288. But he never hit well enough to get called up to the major leagues. He played his last pro baseball game in 1995.

His baseball career over, Jackson returned to football one last time, in 1996 with the Bears. He's credited with serving on returns in five games, ending his professional career.