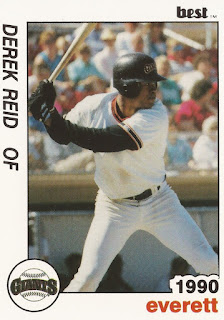 While not quite putting Derek Reid in the same class as his team's most famous alum, Triton College head coach Bob Symonds did tell The Chicago Tribune that there were some similarities with that player.

"Derek climbed the center-field wall to make an outstanding catch for the last out to save a game against Northeast Mississippi on our trip," Symonds told The Tribune in 1990. "On our spring trip in 1982 Kirby caught a ball in full stride that was just spectacular. I'd put Derek's catch right up there with Kirby's."

The Kirby that Symonds was referring to was none other than future Hall of Famer and Triton alum Kirby Puckett. For Reid, though, the similarities with the older Triton player pretty much ended with that catch. Reid turned pro, but, in a professional career that spanned eight seasons, Reid never made the majors.

Reid's professional career began that year in 1990, taken by the Giants in the 10th round of the draft, out of Triton.

With the Giants, Reid started at short-season Everett, hitting .288 in 62 games. He also knocked in 40 and stole 21 bases. In one of his first games, Reid knocked a tie-breaking, eighth-inning single in an Everett win. In August, it was a 10th-inning, game-winning home run, hit as a pinch-hitter.

Reid's 1992 season, though, was cut short. He's credited with playing just two games at AA Shreveport. His 1993 season was also a short one, just 44 games between single-A Clinton and San Jose.

Reid didn't get into a full season again until 1994, playing between high-A San Bernardino and AA Shreveport. Between them, he hit .267 in 110 games.

Reid went on to spend two more seasons in affiliated ball, in the Giants system, spending parts of both at Shreveport. Reid, though, never got higher. He played his final games in 1997 at independent Sioux Falls. There, he hit .250 in 38 games, ending his career.