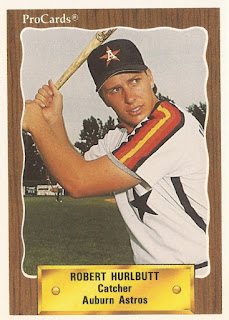 Bob Hurlbutt started his pro career in 1989, but he quickly found he had to wait, according to The Orlando Sentinel.

A pinched nerve in his neck forced the catcher to the sidelines until the nerve could heal, The Sentinel wrote.

"It's not the way I planned to spend my summer," Hurlbutt told The Sentinel. "I'm looking forward to just working out again. I want to get out there and prove myself as a player."

Hurlbutt ended up getting into just six games that summer. He also never really got to prove himself. He played in two more campaigns and made single-A, but he never made it higher.

Hurlbutt's career began that year in 1989, taken by the Astros in the 31st round of the previous year's draft out of Monroe Community College in Rochester, NY. He's also credited by his more formal name Robert Hurlbutt.

At Monroe, Hurlbutt showed some power. He hit three home runs in a single contest in 1989, still tied for the school record.

With the Astros, Hurlbutt started in the rookie Gulf Coast League, where his pinched nerve led to him getting into only those six games. He picked up one hit in 10 at bats.