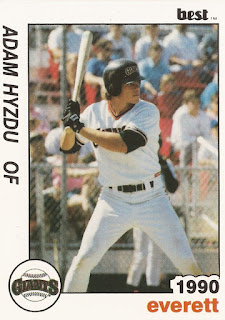 Adam Hyzdu missed out on the Pirates 2003 Opening Day roster, but it wasn't long before he got the call, The Pittsburgh Tribune-Review wrote.

Hyzdu learned of his return to the majors as he was pulled out of a AAA contest mid-game, The Tribune-Review wrote.

"You just know different things are going to happen," Hyzdu told The Tribune-Review after his return, "and you have to prepare yourself for anything."

Hyzdu prepared himself for his first trip to the majors for a decade, finally getting his first call in 2000, his 11th season as a pro. Once he got that first call, though, he went on to a major league career that spanned seven seasons, not playing his final big league game until 2006.

Hyzdu's career began in 1990, taken by the Giants in the first round of the draft, out of Xavier University.

From there, though, Hyzdu climbed slowly. He made high-A San Jose in 1992, then AA Shreveport in 1993. For 1994, Hyzdu arrived with the Reds in a trade. He also got his first brief look at AAA.

Hyzdu didn't make AAA full time until 1997, with the Red Sox at Pawtucket. He then didn't make the majors until 2000, as a September call-up to Pittsburgh.

In 12 games for the Pirates that year, Hyzdu picked up seven hits in 18 at bats, with one home run. For 2001, Hyzdu returned for another 51 games, hitting .208 with six home runs. Two of those home runs came in the same July game.

"Doubles are good," Hyzdu told The San Diego Union-Tribune after that game. "With men on base, they're even better. I know that's profound stuff and cutting edge."

Hyzdu got into his final two major league games in 2006, with the Rangers. In all, over his seven seasons with time in the majors, Hyzdu got into 221 games, hitting .229.

Hyzdu played one more season in Japan, with the Fukuoka Softbank Hawks, ending his career.

In 2012, to The Altoona Mirror, Hyzdu pointed to his 2004 time with the Red Sox as his favorite baseball memory.

"I wasn't on the roster," Hyzdu told The Mirror, "but I was [with the team] for the playoffs. The Yankee thing was amazing, I mean, truly amazing [coming back from down 3-0 in the ALCS]. And then to go to the World Series and win it and be a part of the parade, it was just incredible."